Ahhhh, Montreal. Nothing like taking a break from the grind to absorb a different culture, learn a little French and eat your body weight in meat. The city that is on the other side of the provincial border but feels like worlds away. With 1.65 million French-Canadians nestled into and atop a small mountain, it is no wonder that tourists flock to this Euro-cultural epicentre of North America. Things happen a bit slower here and the hustle-bustle of a typical work week isn’t the vibe it’s going for.

Our Uber driver was helpful on the way to our rental apartment. We kept asking him about smoked meat and poutine, even though we had a few reservations lined up. He chuckled a bit, recommended a few places and reminded us that Montrealers don’t eat like that every day. They might indulge once, twice, maybe 3 times a year in something so decadent. But, for the most part, they all make an ok salary and love spending time with friends and family. He said the government wasn’t really happy about the productivity levels, but they didn’t really care as long as they were happy. It was a breath of fresh air.

Arriving in the afternoon by train gave us only a couple of hours before we headed off to our first place to try. Since we were staying in Mile End — an artsy, eclectic neighbourhood north of the downtown — we decided to head to the famous Café Olimpico. At 5 o’clock in the evening, it was still teeming with activity. With barely a spare table, we tucked up in the corner to sip on a coffee.

After killing an hour on an espresso, we decided to walk the short distance to the newest emerging neighbourhood: Mile Ex. This neighbourhood has been around for a while, but not as Mile Ex and not as a hub of some of the most amazing contemporary eats. It is rumoured that the neighbourhood was labelled Mile Ex after the restaurant named Mile Ex opened in 2012 by Chef Grégory Paul. This name was chosen because it was between 2 neighbourhoods: Mile End and Parc Extension. Clever. Since then, the restaurant and neighbourhood have risen in off-the-beaten-path prowess. It’s cool, it’s hip and some claim that it will be the number 1 neighbourhood to live in by 2018.

With dinner reservations at Manitoba, we decided to have drinks and appetizers there. It was intimate, cozy and had that feeling of going to somewhere familiar. We were the first to arrive and were treated well. Our awful French wasn’t scoffed at, rather a point of interest: “Where you from? What brought you to Mile Ex?” It made us wonder how many ‘foreigners’ or out-of-towners would be pouring into this place.

With wine and locally-brewed beer in hand, we chowed down on two appetizers: calamari and grilled leek. La poellée de calmars et chou-fleur was visually stunning. Laid out on a hazelnut hummus with shaved cauliflower and squid ink crumble, it was the definition eating calamari well. Textures, flavours and smells all perfectly combined on a plate.

Le poireau entier brulé et burgots sautés reminded Kev of calçotes — the traditional Spanish onions that are grilled on a hot fire while wrapped in newspaper. Not that we have eaten them before, but we watched a show on it. This long leek was grilled for half an hour until completely charred on the outside. Slit open, it was drizzled with butter and sea snails then topped with a crostini. The smokey flavour, the sweetness of the leek and texture of the crostini made it a killer combo. Sadly, we didn’t stay for dinner. But we will return again.

Onto Manitoba, a Mile Ex restaurant that is brimming with activity. This locale prides itself on sourcing locally found items and game. Deer, fowl, elderberry, maple syrup, whatever is on the menu is typically found in the great Canadian outdoors. Despite already eating a couple of appetizers, we chose another: hay-smoked potatoes. Creamy, smokey and wholesome goodness in a few small bites.

The Elderberry Lacquered Guinea Fowl was incredible. Hidden beneath it was celeriac, some more leek and Indian celery with a bit of crumble.

The pièce de résistance: Deer Steak. Sprinkled with cocoa and wild mushroom powder, sitting atop parsnips and beets. Tender, game-y and rare as foque. The whole place held a good vibe with more volume than the first spot. Depending on what you are looking for, each place offers a different ambience, but both with great food.

Finishing the night off, we venture into Vices & Versa, up the road on Saint Laurent. All the craft beer you could imagine, rustic vibe and a little bohemian. A couple of strong pale ales later and it was time to hit the hay.

One hangover later, we decided to check out a brunch spot in Mile End because, hey, it was Sunday. Lining up on Fairmont to get into Fabergé wasn’t the worst thing. The menu is long, much like the line outside, and it has a great cozy vibe. The food came quickly and it was abundant. Great people, great service and the food was exactly what we needed to start an even longer day of eating.

One food coma later and we were on our way to Shwartz’s, nestled in the buzzing neighbourhood of Plateau. This Charcuterie Hebraique is a cultural institution in the city. The interior has not been changed since they installed the first fluorescent lights. The menus are classically designed, it has a cafeteria-style setup of vinyl covered tables and the walls are adorned with celebrities from the ages. It was purchased by the Nakis and Angélil-Dion family in 2012 and was kept pretty much the same. 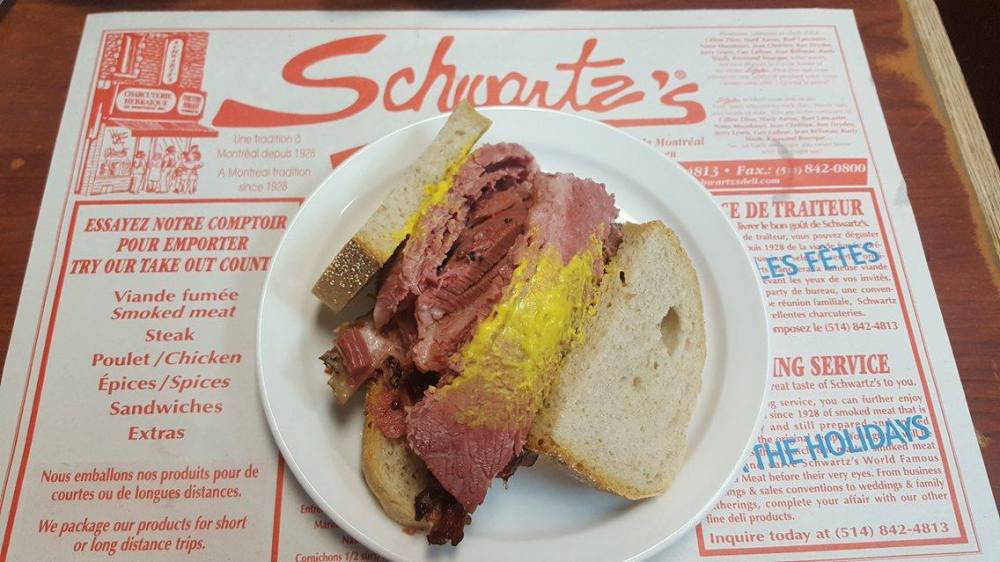 The meat is stacked five slices high and you can order a variety of sides: fries, slaw, pickles and of course poutine. Since our first meal, we could only manage to split a sandwich with a few sides. Greasy, fatty and exactly the way 5 slices of smoked meat on top of rye bread should make you feel.

On the way back to the apartment we decided to pop into a cafe. Again, the typical socializing buzz or artistic refuge of the city. Back at the apartment, we digested by laying around like large cats. After a couple of hours, we made ourselves look proper and headed out to the notorious Au Pied de Cochon, also located in Plateau. Every Montrealer forewarns distant travellers to get ready for some meat at this restaurant.

Chef Martin Picard serves up Québécois fare featuring foie gras, pork dishes and canned duck. We started off with the Cromesquis de foie gras — square of foie gras that were battered and deep fried — and the Temaki Tartare — beef tartare in a hand roll. 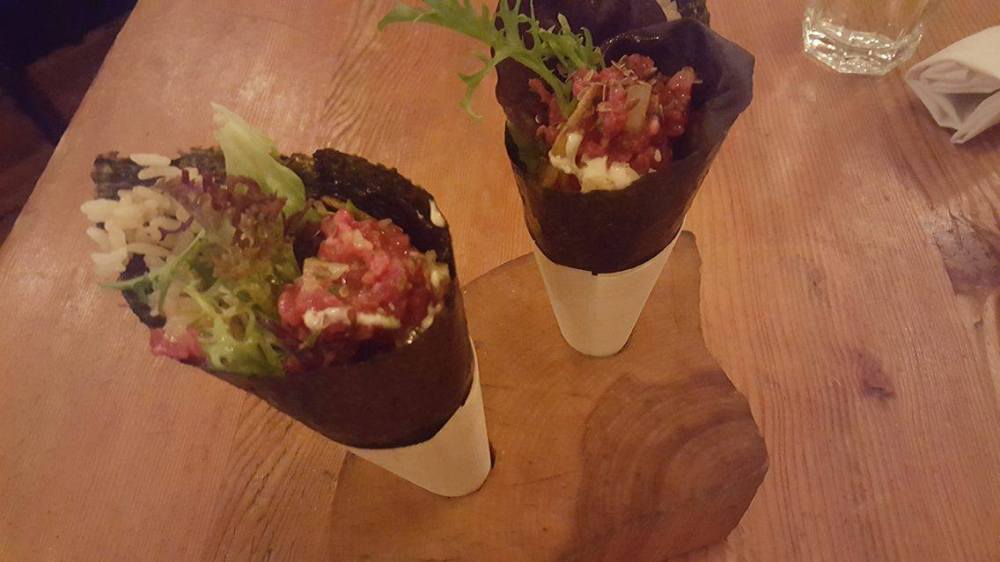 Next up were the mains and we were already brimming. We ate the Flanc de Porc — pork flank rolled around nuts, spinach and capers, then cooked in a cream-based broth.

And the Canard en conserve — duck, veg and spices sealed into a can and essentially cooked sous vide for a few hours. The presentation was interactive and flawless.

Not to mention that during the whole meal we were dining beside Hank Shrader, the detective character from Breaking Bad. 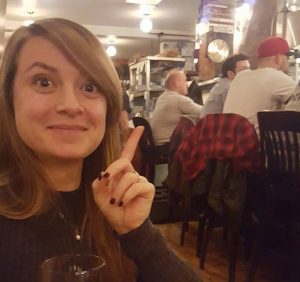 To top off the night, we rolled ourselves to a new local favourite, Majestique. Like something out of a Wes Anderson film set in old Europe. Its boho-chic design reminded us of our home. A couple of old-fashion cocktails later and it was time for bed.

The next morning we woke to a crisp blanket of snow and the melancholy of a journey’s end set in. We took our time gathering our stuff, only to head out for one last Montreal breakfast at L’Avenue. Quirky and eclectic, this favourite spot in the city was packed, even on a Monday at 1pm. The portions were massive and the servers were amazing.

Next stop was to buy 2 dozen bagels to bring home. Luckily, St. Viateur Bagel had a cafe up the street. Freshly baked bagels were being rolled out and packed fresh into our paper bags. They would be the perfect treat for the train home.

We made a quick stop in Vieux Montreal to experience some old architecture. Word on all the streets, even in Toronto, is that the city turns 375 years old next year. And you can feel it. There is an old soul in Montreal. It relies not on the flash and pomp, but the relationships that happen within it. The city and the people hold onto their traditions, even if it means making things a little more difficult to integrate into the mainstream culture.

We say, do you Montreal. You are doing fine.